skip to main | skip to sidebar

Did the ISP Supply a Bridge or a Router?

This week I helped two friends configure wireless devices and get them working. In both cases, the root of the problem was understanding what services were provided by the ISP's device and what services should be provided by the wireless device. In one of the problematic cases, a cable connection, the ISP supplied a transparent bridge that allowed a single device to be configured using DHCP and provided a registered IP address. In the other case, a DSL connection, the ISP supplied a consumer-grade router with network address translation, DNS forwarding, and the ability to configure clients using DHCP. Configuring the wireless device properly required an understanding of the ISP's device.

For the purposes of this document, bridge and router, when applied to the device supplied by the ISP, have the following meanings.

A bridge supports a single IP address and serves to translate (bridge) between one transmission medium and another, for example, between TV cable and Ethernet, between DSL and Ethernet, or between Ethernet and WiFi.

The term router is misused slightly here to mean a consumer product that requires a single IP address on its outside (wide area network, or WAN) port and supports multiple client devices, each with its own IP address, on its LAN ports.  To support multiple “inside” IP addresses, a consumer router necessarily implements network address translation, or NAT.  It generally also provides DHCP configuration of clients and DNS forwarding.  It could optionally provide a bridge between media types.  It might provide other services, such as NTP relaying.
Although I've misused the term router slightly, my use here is consistent with industry practice and shouldn't confuse anyone. Strictly speaking, a "router" connects different networks, i.e. networks where the network part of the IP addresses are different. A consumer-grade wireless device does that, but also provides the other services listed above.

So, the key question becomes, "Did the ISP supply a bridge or a router?"


Is the ISP device a bridge or a router?

Record any manufacturer information or model numbers on the physical device. Google is your friend.
Connect a device running Microsoft Windows to a port on the ISP device, open a command window, and issue the command ipconfig /all

Assumption: a device such as a laptop that’s plugged directly into the ISP device “just works,” so it was configured using DHCP and there’s a DHCP server someplace in the ISP's infrastructure.

If there are multiple Ethernet ports on the ISP box, connect two client devices to two of the ports.  If both clients work and report different IP addresses within the ranges listed in step 3 above to ipconfig /all then the ISP device is a router with probability one.  Otherwise, it’s almost certainly a bridge.

If there’s only a single port, establish a configuration like this: 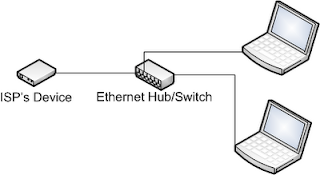 If both clients work and report different IP addresses within the ranges listed in step 3 above to ipconfig /all then the ISP device is a router with probability one.  Otherwise, it’s almost certainly a bridge.


Of Course, It Could Be a Duck

Bob Brown
Emory Village, Georgia, United States
I've taught at Southern College of Technology, Southern Polytechnic State, and Kennesaw State since 1996. Now I'm working with the College of Computing and Software Engineering on outreach to K-12 schools. If you'd like me to visit your school, check my topic list, or contact me to prepare material specifically for your school. Teaching followed a 30-year career in information technology beginning in 1969, and in medical informatics since 1974 when I began working with the Medical Association of Georgia to develop a methodology for medical care review to assure quality and appropriateness of medical care for Medicare patients. I taught because it's rewarding to help students have the "Aha! experience," and that happens several times each term. It makes me feel really good to help others learn the things that I know and to learn new things myself in the process.